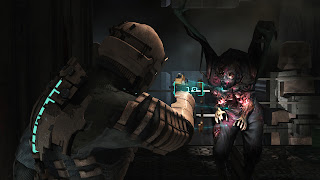 Dead Space 3 brings Isaac Clarke and merciless soldier John Carver on a journey across space to discover the source of the Necromorph outbreak. Crash-landed on the frozen planet of Tau Volantis, Isaac must comb the harsh environment for raw materials and scavenged parts. He will then put his engineering skills to the ultimate test to create and customise weapons and survival tools. The ice planet holds the key to ending the Necromorph plague forever, but first Isaac must overcome avalanches, treacherous ice-climbs, and the violent wilderness. Facing deadlier evolved enemies and the brutal elements, Isaac can choose to team up, not only for his own survival, but for that of mankind’s. Play together with a friend or go it alone as Isaac Clarke using the seamless new drop in, drop out co-op functionality. Each mode offers unique story elements and gameplay.
Posted by Randy at 10:57 AM 6 comments:

Email ThisBlogThis!Share to TwitterShare to FacebookShare to Pinterest
Labels: Articles 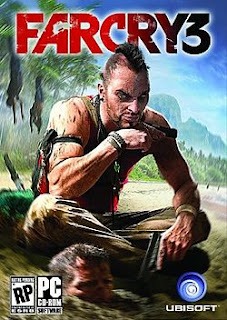 Far Cry 3 is an upcoming open world first-person shooter video game being developed by Ubisoft Montreal in conjunction with Ubisoft Massive, Ubisoft Reflections and Ubisoft Shanghai and published by Ubisoft for PlayStation 3, Xbox 360 and Microsoft Windows. It will be the sequel to 2008's Far Cry 2. The game is set for release on September 4, 2012 in North America and September 6 in Europe.

Far Cry 3 takes place on a tropical island found somewhere at the intersection of the Indian and Pacific Oceans. The main goal of the game is to escape from the islands (as there will be more than one, mentioned by Dan Hay) and their crazed inhabitants.

On June 6, 2011, Ubisoft showcased the demo gameplay of Far Cry 3 in its E3 2011 conference. It was revealed that the player has the ability to shoot enemies behind objects in crouch mode without moving his head up but with free hands. The demo also revealed an overhauled stealth mechanic as well as a possible leveling system based on experience points. The player will also have the ability to perform "takedowns" by performing melee attacks from above or in crouch mode. The game's narrative director, Jason Vandenberghe said that the story mode map will be around ten times larger than its previous installments, indicating that it is still an open world sandbox game. According to new gameplay uploaded throughout video sharing sites, it has been noted that the player will be given the ability to survey and plan out his attacks with stealth takedown combinations and also take pictures with his cameras.

Far Cry 3 returns the series to a tropical island setting, similar to the first game and unlike the second game, which took place in an African savanna setting. Players will assume the role of protagonist Jason Brody, a tourist who has been stranded on an island chain in the grips of violent local conflict for years. Jason has been separated from his girlfriend and, in his search for her, developers have stated he will have to deal with a wide cast of mostly unstable characters who have been trapped on these islands for some time. In the short demo trailer that was the first footage released of the game in development, Jason interacts with one such character, named Vaas (voice, mocap and facial motion capture by Michael Mando), who gives an unsettling monologue about the nature of insanity before trying to drown Jason by anchoring him to a cinder block and throwing him into a natural pool of water that has clearly been used repeatedly for this purpose.

Early developer interviews provided little about Jason's backstory, aside from the fact that he possesses a strong skillset as a combatant and survivalist that give him a fighting chance in the desperate circumstances he constantly finds himself in during the events of the game.

More recent interviews have hinted at a change to the story in that Jason is now emphasized to be a man out of his element, with no particular training who just happens to be caught up in the island's chaos as he searches for his friends. At the same time, the story will try to invoke that after a time trapped on the island, it will start to have an effect on the protagonist, showing another side of Jason's personality, according to producer Dan Hay. Developers have also stated that the intended tone of the game will be one of realism and intensity and an attempt to invoke a visceral and constant feeling of danger in the player.

At E3 2012, it was announced that there will also be a co-op campaign with it's own story and characters. It can be played with up to four players online or two players playing on split screen.

It has been confirmed that Far Cry 3 will feature a sandbox editor, just like previous Far Cry titles. And it will have "A fresh coat of paint. We are going to optimize it". It was stated in the 'Multiplayer Revealed and Map Editor confirmed!' video on Youtube, that it will be "Far Cry 2's map editor, but a lot bigger and a lot better".

In August 2010, PC Gamer reported that development of Far Cry 3 was in "full swing" at Ubisoft Montreal. In the same month, GAME and Swedish retailer Webhallen listed the game for a 2010 release, which didn't happen. In January 2011, Ubisoft declined to comment on speculation that Far Cry 3 will be hitting shelves in October after Game Informer listed the game as an October arrival in its 2011 preview feature.

In February, the Official PlayStation Magazine suggested that the game was due for release at the end of 2011 as the following quote suggested, "Start taking the malaria medicine in preparation: Far Cry 3 could be arriving before the end of the year." This statement was withdrawn in next month's edition where it was stated that the game would be shown on 2011's E3 and that the release date would be bumped back to 2012.[full citation needed] In May, the CVs of a couple of stuntmen listed Far Cry 3 as one of their previous projects. The first official walkthrough was released at the 2011 E3 conference on June 6, 2011.

Players who pre-order Far Cry 3 will receive The Lost Expeditions Edition of the game. It contains two exclusive missions not available in the regular version. These missions, "The Forgotten Experiment" and "Ignition in the Deep", offer 40 minutes of additional playtime, plus a Type 10 Japanese World War 2 flare gun for use in the game's multiplayer modes.

Players in America who pre-order Far Cry 3 from Gamestop will receive The Monkey Business bonus pack. It includes four more missions "hosted by Hurk and his bomb-carrying monkeys." and "two bonus ways to humiliate your friends" in multiplayer.

During the Penny Arcade Expo 2012 or PAX East 2012 there was a playable (multiplayer) pre-alpha version of the game. If you allowed the booth to shave your head into a mohawk style similar to Vaas (the game's main antagonist) they would reward you with a free copy of the game at launch.
Posted by Randy at 10:49 AM No comments:

Email ThisBlogThis!Share to TwitterShare to FacebookShare to Pinterest
Labels: Articles 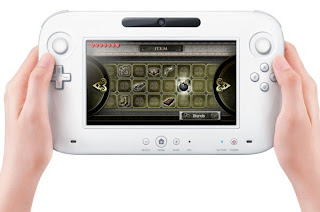 Reviews of the new Wii U are intriguing and also luke-warm, depending on who you are reading. If you are reading me, you get something in between. Wii U features an HDMI output which will output 1080p, but will not support Blu-Ray discs or DVD formats because Nintendo didn't want to pay the licensing royalties. This alone could make the console less attractive for many who are trying to choose between PS3's built-in Blu-Ray drive and the Wii U. Nintendo seems to be relying heavily on their unique brand and titles to see them through the format deficiency.

Wii U Specs: the Processors

To get a little more technical, the Wii U processor borrows on IBM's POWER processor architecture, one that has been criticized by a few (see Larry Ellison's quotes all over the internet) about it's inefficient design, and how it isn't green. This could be a significant issue, considering the millions and millions of consoles that will sell. Processors are definitely the center of the work that takes place.

In terms of graphics processing AMD has been more forth-coming as to an exact model number. They have announced that the Wii U will be using the R770 Radeon processor. This is at the fore-front of AMD video processing technology, outputting beautiful 60Hz 1080p video and supporting a whole new world of possibilities for Nintendo games. Critics view them as arriving on the scene late.

As stated before, the Wii U will have an optical drive but will not accept Blu-Ray or DVD discs due to licensing qualms. Instead, Nintendo has opted to blaze their own way with their own proprietary format of HD video disc. Their new format will be high-density like Blu-Ray and will only work for their own players. Do they do it just to drive you and I the consumer crazy? They definitely have meetings where they decide which route will make them more money in the long run, but what people should probably realize, is that HD streaming is right around the corner, and HD physical formats will be a non-issue. Perhaps Nintendo is making the right move. Whatever move they make, they are basically relying on the fact that everyone will be subscribing to online services like Netflix and Hulu plus. They are also relying on people having high-speed internet in general.

With the new console also comes a new controller. The new controller is quite large and has a 6.2 inch touchscreen built-in. It is not meant to replace the traditional remotes, but is meant to enhance gameplay, offering a new view into the game world. This allows new game types to be made, where players can hide and seek, or fight each other with their own unique perspectives on the game world.
Posted by Randy at 10:45 AM No comments: